This study examines whether capital charges for infrastructure debt should be lower than the charges currently required by the Solvency II and IAIS regulatory frameworks. This question is important as (i) infrastructure investment is widely viewed as a key component of economic development and (ii) historical data on infrastructure debt strongly suggests that this class of corporate debt is much less risky than, for example, corporate bonds.

The European Authorities regarded the issue as so important that they reopened the calibration of the Solvency II charges late in the development of that framework and adopted somewhat lower charges for a restricted category of infrastructure debt. So far, the IAIS in developing its International Capital Standard (ICS) has not made any concession to the low credit risk nature of infrastructure loans.

This report revisits the calibration of Solvency II and the ICS, deducing capital charges for credit exposures with the superior credit performance of infrastructure loans. The calibration approaches adopted are designed to be as close possible in spirit and approach to those apparently used by the regulatory authorities (EIOPA in the case of Solvency II and the IAIS in the case of the ICS).

For the ICS charges, we perform a bottom up calibration using variants of the modelling approach (based on a well-known paper by Vasicek (2001)). For the Solvency II charges, we suppose that the current framework is correctly calibrated for corporate bond claims and then calculate what would be appropriate capital charges for other debt claims that have the historical credit performance observed for different categories of infrastructure loans. In both analyses, we build on past work by Jobst (2018) who studies infrastructure risk and capital charges in some detail.

An important aspect of the Solvency II capital charges is that they include a diversification adjustment that is specific to the balance sheet of the insurer performing the calculation. We calculate capital charges (i) for a purely specialist insurer only holding corporate debt and (ii) for a typical European life insurer with a balance sheet investigated in past studies by us and other authors (see Höring (2012) and Kutas, Perraudin and Qiu (2016)).

This study was commissioned from Risk Control by Global Infrastructure Hub. 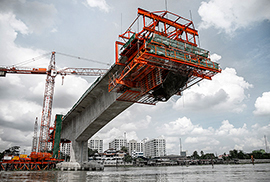